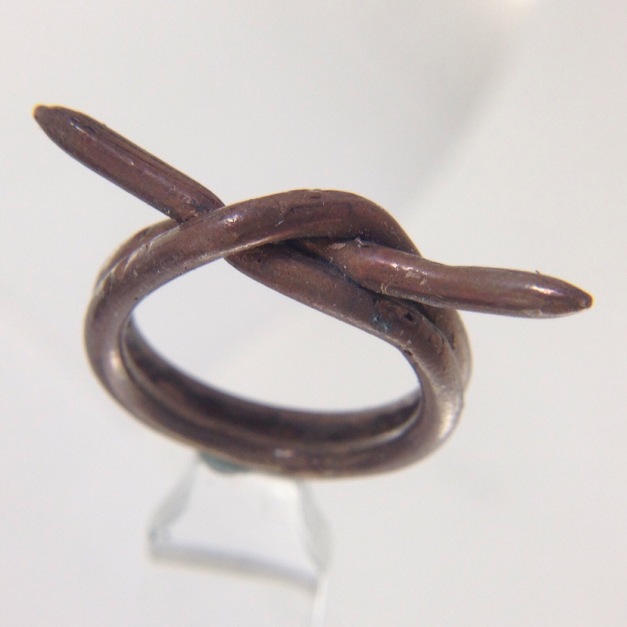 I was digging in my workbench at home and found these rings. My first cast ring (copper barbed wire ring) and first fabricated ring. (The silver dangerous, spike ring).

Not sure where the spiked peace sign pendant wrapped in fabricated barbed wire went. Lol.

I am glad that I grew out of the dangerous jewelry phase.

When putting on a small brush on a mandrel, it helps to taper the end of the mandrel so the brush centers itself when you put it on.

We have had positive feedback of our repair/custom shop visible from the showroom. I have great response regarding this blog. We have found that people are genuinely curious and interested in what happens at the jeweler’s bench.

After watching some videos on sharpening my goldsmithing skills, I thought how cool it would be to have a bench monitor for our customers. My Mantis bench microscope, that I love, has an awesome big brother that is outfitted with a webcam. That would be nice to have, however, it is $2500, so that is not happening any time soon. My solution: I took an old laptop and dedicated it to a good webcam and ran a wire through the wall to a monitor in the showroom. The WebCam is aimed towards my bench pin and covers a pretty good viewing area of where all the action takes place. When jewelry is brought back to me for inspection, the customer can see how I am poking and prodding, checking for loose stones. They can watch me, from a close up perspective, tightening their stones. I can even press record and document the entire inspection including audio.

side notes: I do not have a live feed of the microphone to the show room. My singing would surely drive away customers.

Also found it frustrating that the Logitech C920 webcam software does not support a full screen view. I found free third party software to fit the bill. 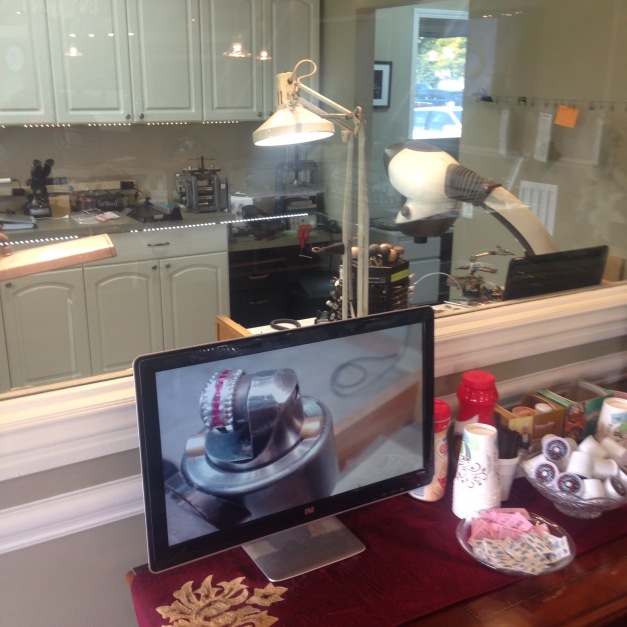 Here is a GRS benchmate modification that has really helped me save time. I made a mini wood bench pin to cover the metal hand rest that comes with the Benchmate system. I have been using the metal brace for a quick cut or support for drilling. But a wood bench pin is much better for that. I used a scrap 1/4″ strip of hardwood. Cut out some notches for a screw and wing nut to attach it and a few odd shape cut in the front for saw piercing and filing.

If I have a job more suited for a sturdy bench pin, I switch out the ring holder for the quick-change pin. But this is a nice, time saving addition so I don’t have to.

Because we do custom work, I explain the casting process all the time. The whole thing from front start to finish is very interesting. However, It is a long procedure with a lot of down time between steps, so it is something the customer can not just stick around to watch. Multiple pieces can be cast at the same time. But for this demonstration, we are doing one. 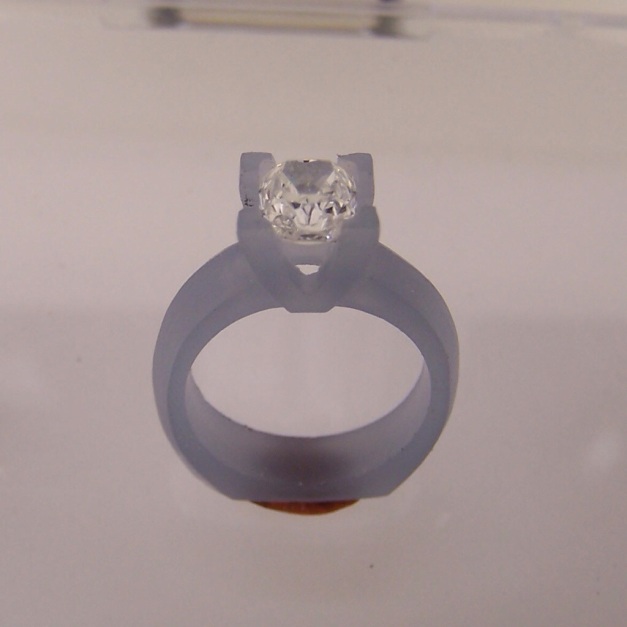 THE WAX
Most jewelry starts here. Pieces that are mass produced or duplicated usually starts with a carved wax, even though there are situations where you might make the original directly in metal by fabrication. We still hand carve most of our waxes but for some intricate pieces we have CAD (computer aided design) produce a wax. Shown here is a 4mm wide knife edge band with a carved head for a modified radiant cut diamond.

WAX ON RUBBER BASE
After the wax has been carved and approved by the customer and any modifications have been made, a wax sprue is attached to the model and it is attached to a rubber base.

METAL CYLINDER
A metal cylinder, corresponding in size to the base, is added. By formula, a specific amount of water and investment (a special, fine plaster) is mixed then vacuumed in a chamber to remove bubbles. 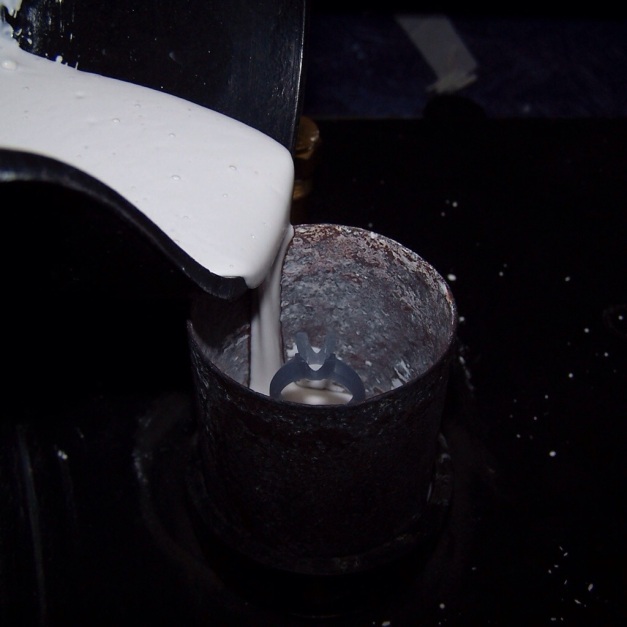 POURING IN THE INVESTMENT
We then pour the plaster into the cylinder and repeat debubbleizing in the vacuum chamber.

Shown here is our vacuum chamber.
The air is removed from the bell jar, removing any bubbles trapped in the plaster or attached to the wax. The cylinder is topped off with the remaining plaster.

The cylinder rests for an hour for the plaster to harden. Then we remove the rubber base to expose the end of the sprue and it is placed in the kiln, sprue side down. 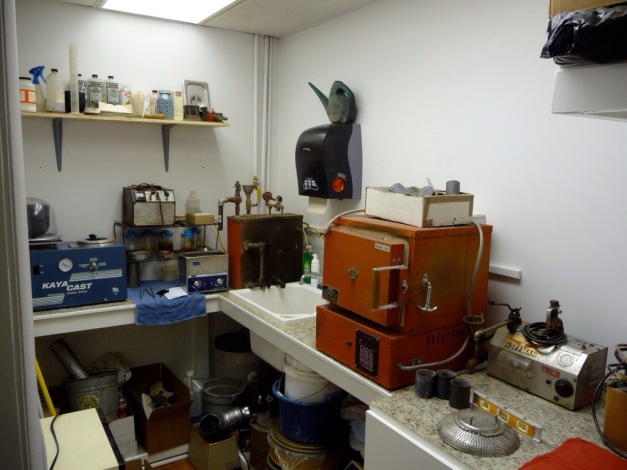 OUR CASTING ROOM
We have a computer controlled kiln that we programmed to come on at midnight and slowly takes the oven up to 1350 degrees in ramped stages and brings it back down to about 900 degrees (cylinder casting temperature) at the time we arrive the next morning. What happened over night was, as the kiln temperature raised, the wax melted out, leaving a cavity of exactly what we carved.

We basically pour the molten metal into the cylinder down through the sprue into the cavity of the mold. Actually, we force it in with a centrifuge. But you get the idea. Some people use a vacuum to assist in getting the molten metal in the mold.
The plaster is broken away and the what remains is the rough casting ring with its button. To cast the 7 gram ring, we used about 21 grams of metal. The extra metal helps push the metal into the mold and is needed. The sprue button can be used in the next casting, so it is not waste.

Shown here is ring with the sprue cut off. The shank has been burnished, sanded and is ready for stone setting and then polishing. At this point the ring the ring is a one- of-a-kind. To make it again I would have to carve a new wax. A second option is to make a rubber mold of this original. The rubber mold can be injected with a molten wax injector to make additional waxes for additional casting. 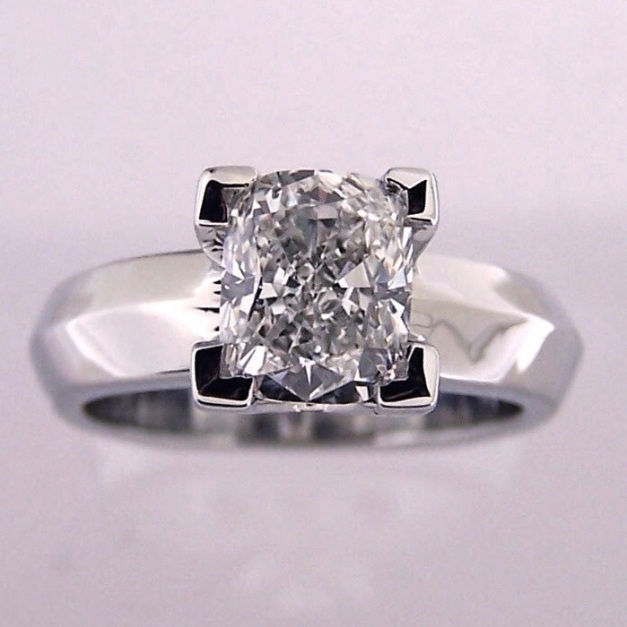 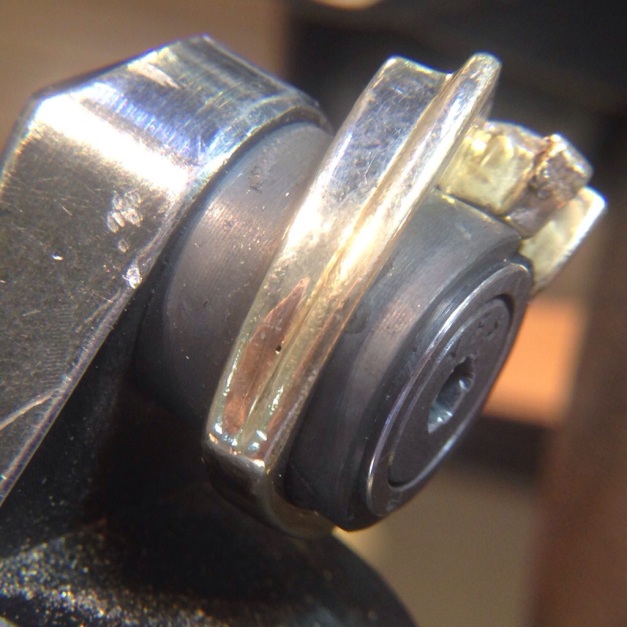 When I refinish a ring, instead of sanding out dents, scratches and dings, I use a number of burnishing burs to move and push the metal into the dings. (See picture below)

At this point, the surface is fairly smooth. It takes very little sanding to make it flat. I love to use rubber abrasives instead of sanding discs. 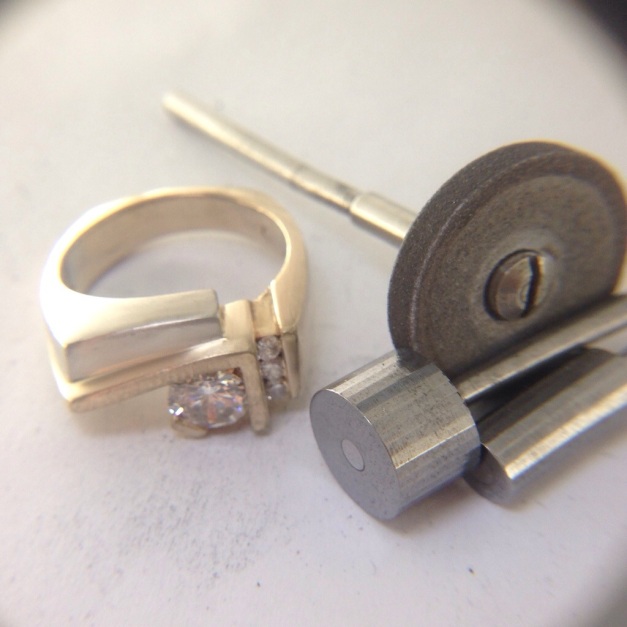 If money is tight and you don’t want to spend the $25-35 for the tungsten burnishers you can make one using a used burr. Heat it up to anneal it. I bend it while I am torching it. 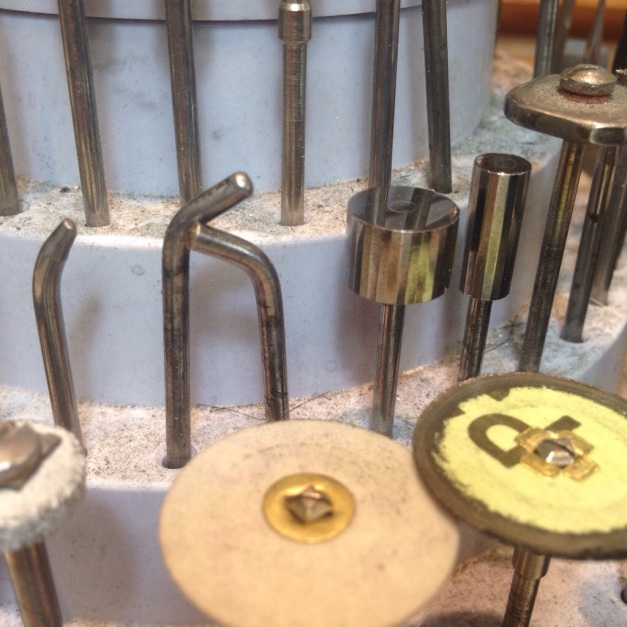 For polishing, my number one bench jeweler tip is using a used sanding disc on the mandrel upside-down and charge it with tripoli. You can get into tight places and keep a crisp, flat surface. 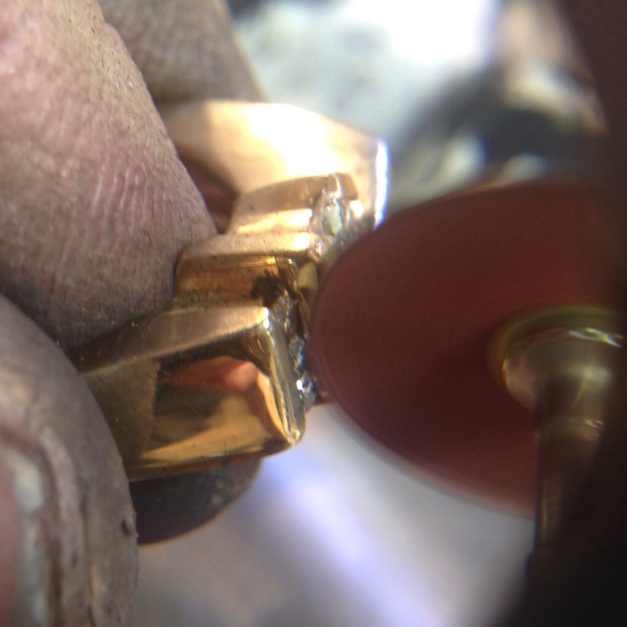 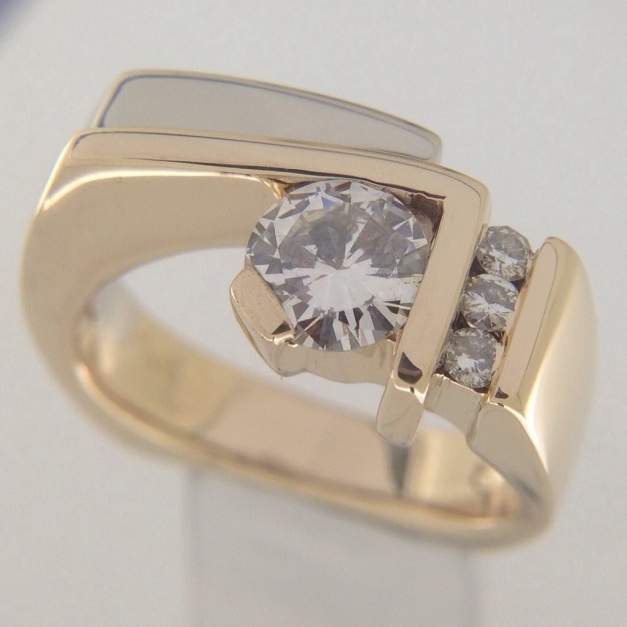 This method takes a little bit longer, however, the results are much better then just sanding out blips. Another bonus is that burnishing the ring “work” tempers (hardens) the metal so it scratches less for the customer.

On our custom pieces, after casting, we beat the surface with the burnishers to harden them. Especially the shanks of rings. This works great on sterling silver. Burnishing with the bent burr also can get rid of porosity. 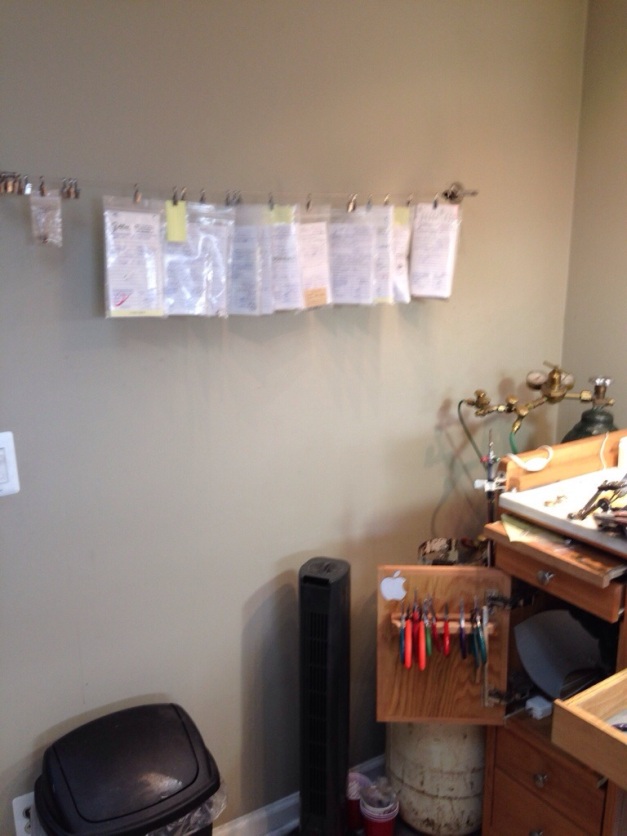 I bought this cable curtain kit from Ikea and placed it on the wall next to my bench. In the morning we go through the current repairs and custom work. I hang mine up so I can see all the dates and can see what needs to be performed and prioritize them. The staff can easily see what is in the cue and can move a job envelope to the left to put it on deck for the next job to be done. I like it better then them stuffed in an overloaded jobs box. I clip up just the daily goal of jobs and see how the day is going and I feel more on top of things.

Picture of me at my first goldsmith job 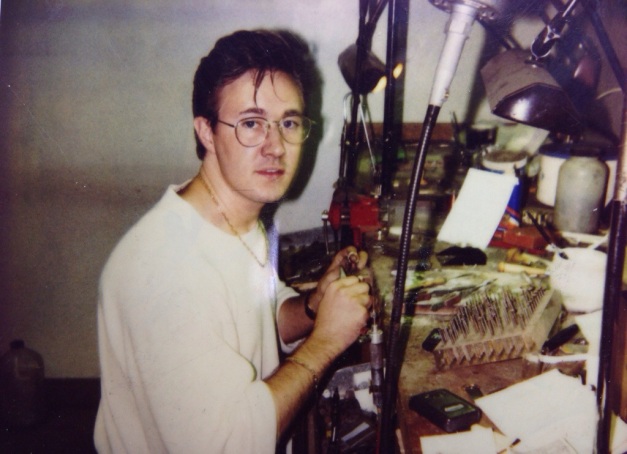 Me at the bench at my first jewelry store job at Mason Jewelry Design. Back in 1990. 24 years later – same hair cut. Lol 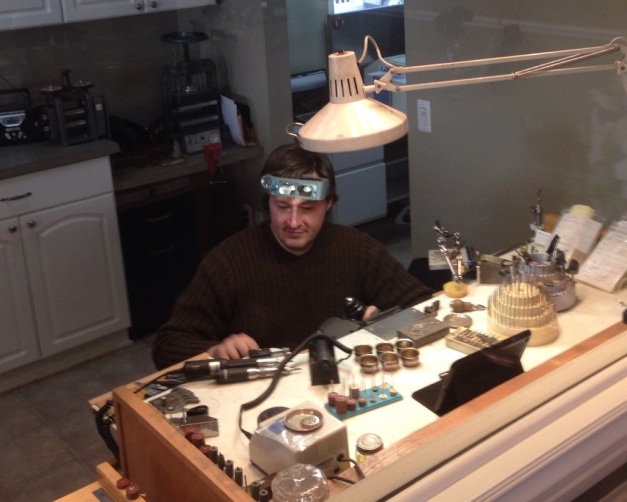 But much cooler bench. 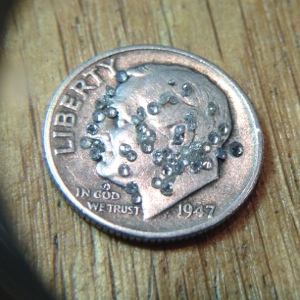 As I am forced to using the bench microscope more and more because of today’s jewelry that use micro pave’ diamonds. Yesterday I was setting up some new rings and replacing/repairing some micro bead set diamonds with 0.8mm diameter diamonds. To give prospective of how tiny these are, I took a picture of some on a dime. These are full cut diamonds with over 50 facets. Whereas a number of years ago, melee under 0.02ct were “single cut” stones with 27 facets.
One of my diamond sources is now cutting full cut 1/3 pointers. (0.003 carat)

Looks like I will need to keep my microscope nearby. 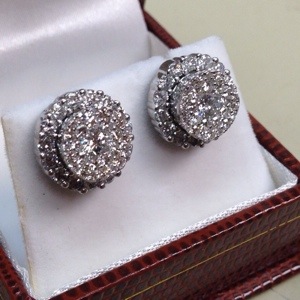 At Atlas Jewelers we perform appraisals for insurance purposes. A GIA certified grader will appraise your jewelry. We will clean, inspect, record the measurements, photograph the jewelry and write the item’s information while you wait. We will prepare your appraisal for mail or pickup. For accuracy, please bring in any documents related to the item(s).